It was a long night – the North West was the last English region to declare their results, partly I understand due to a re-count in Trafford. I think the North West result mirrors the UK as a whole for the Lib Dems, we held our own (lost a little, perhaps 1%) but Labour took a mauling, mainly at the hands of UKIP. 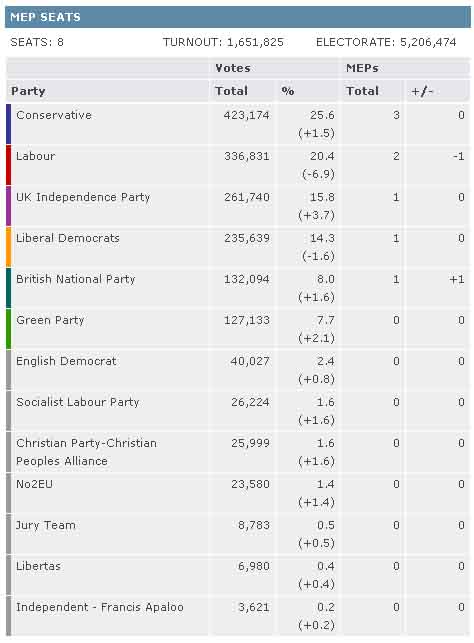 Sadly, the BNP elected Nick Griffin in the North West and 1 other in Yorkshire & Humber – I saw a press conference from UKIP this morning stating that if UKIP had managed 900 more votes, Griffin would not have been elected. A real shame the BNP were able to take advantage of a protest vote.

On a more positive note, Chris Davies (one of the most hard-working MEPs) was re-elected which is great news. Well done Chris and the team – it was a late finish, but worth the wait!

You may also like:
Why you should vote Lib Dem Steve Middleton for Besses ward
A few words from Tim Farron, new leader of the Liberal Democrats
Lib Dems Commit to End Rough Sleeping
Unsworth local election debate sponsored by Spotted Unsworth: uncut
Salford Euro Result
Farewell Ronaldo, thanks for the memories (and the goals!)